Kicking This Habit Increases Your Profits

Are your habits hindering your profits?

But it’s also a dangerous way to count. Why? On the one hand, it lets you cover a lot of ground quickly. But on the other hand, it skips a lot of territory in between those numbers that end with zeroes and fives. And when you’re negotiating, the numbers between zero and five have the potential to increase your profits. By a lot!

Are You Talking About Profits This Way?

After many years of talking with buyers, sellers, business leaders and others involved in negotiating for their organizations, I continue to be surprised by the propensity of so many people to think of things in these very round numbers. They talk about profit margins in increments of five, and prices in the same tiers. Payment terms are frequently negotiated in even larger increments—usually 30 days at a time. This phenomenon occurs in large companies and small ones, in multi-million-dollar deals and small sales.

Recently I was talking to the sales leader of a company who had become frustrated with the pricing decisions made by senior leaders of her organization when responding to RFPs. They were losing business based on their pricing, which was always authorized with profit margins of 20, 25 or 30 percent. While I’m in favor of keeping margins high wherever possible, I wonder if some of those bids could have been won at margins of 22 or, better yet, 26.4 percent instead. There is a significant amount of profit in those fractions over time. Certainly, it’s better to get a sale at 3.6 percent lower profit than to lose it altogether by digging in your heels at 30 percent!

How About Some Examples…

If they were bidding on a $1.4 million project, a 30 percent margin would mean profits of $432,000. This is a worthy goal. Yet, the same project with a 26.4 percent margin would have resulted in a lower price of $1.3496 million, and profit of $356,294. Assuming that the lower price would win the deal, giving up a few thousand dollars makes a lot more sense than stubbornly clinging to an artificial number (30%) and losing all of the profit, doesn’t it?

Another aspect of this topic is around setting prices, not just margin. If your product usually sells for $25,000, and your profit margin is 20%, you stand to make $5000 on each sale. But if you instead set the price of that product at $25,846—that’s just 3.4% higher—and your cost remains the same ($20,000), your profit margin increases to 23.4%. That’s an increase in profit margin of 17%! The additional benefit of this very small increase in price is that you can sell 14.3% less of the product and still make the same net profit. 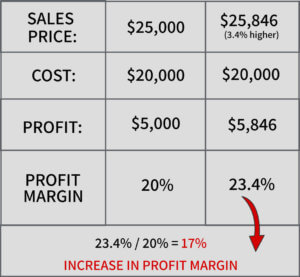 The Principle Applies to More…

And it’s not just about money, either. If we go back to the discussion of payment terms, for example, there is no real reason why this part of an agreement must be done in blocks of 30 days. Why not 24 days, or 41? Sure, we’re not used to it, but that doesn’t mean it can’t be done. If a slight change like this makes the agreement better, then why not consider it? After all, doing something a certain way just because you’ve always done it that way doesn’t make it the best choice.

So, certainly you can continue counting in fives as a negotiator. But you may be missing opportunities to improve profits, make more creative deals, and win more.

How can you break the “zeroes and fives” habit?